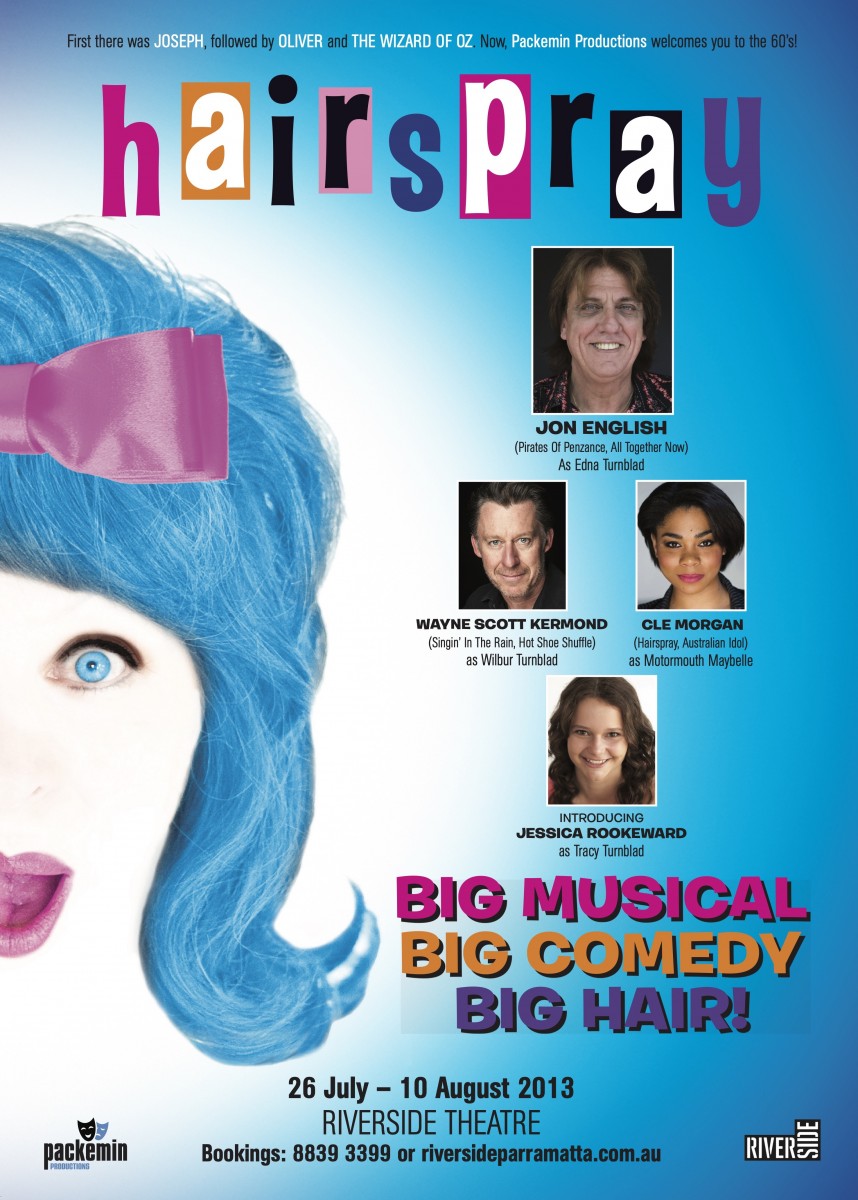 
It’s 1962, the ’50s are out and change is in the air. Baltimore teen Tracy Turnblad, a big girl with big hair and an even bigger heart, has only one passion – to dance. She wins a spot on the local TV dance programme, ‘The Corny Collins Show’ and, overnight, is transformed from outsider to irrepressible teen celebrity. But can a trendsetter in dance and fashion vanquish the programme’s reigning princess, win the heart of heartthrob Link Larkin, and integrate a television show without denting her ‘do?

HAIRSPRAY starred Australian entertainment legend JON ENGLISH in the role of Edna Turnblad. Jon has starred in musicals, drama and comedy, released 15 albums, written musicals and scores for film and television, as well as touring internationally with his band. His career highlights include playing Judas in the original production of Jesus Christ Superstar, his Logie Award-winning performance as Jonathon Garret in the television mini-series Against the Wind (for which he also wrote and performed the series theme song, ‘Six Ribbons’), playing Pirate King in the Pirates Of Penzance, and the lead role of Bobby Rovers in the hit television comedy series Altogether Now.

The show also saw Helpmann Award nominated performer WAYNE SCOTT KERMOND (Singin’ In The Rain, Hot Shoe Shuffle) return to Packemin in the role of Wilbur Turnblad following his starring role as Fagin in Oliver! CLE MORGAN (Hairspray, Australian Idol) reprised her performance as Motormouth Maybelle from the recent national tour of HAIRSPRAY, and we are thrilled to introduce talented newcomer JESSICA ROOKEWARD as the loveable Tracy Turnblad.

Winning over 30 major awards worldwide and acclaimed as ‘the musical with everything’, the whole family will love HAIRSPRAY.

"It moves at a cracking pace and the musical numbers are bursting with life, with choreography that fills the stage and excites with its raw energy. Led by Jessica Rookeward as Tracy – who is astonishingly only sixteen and already a force of nature on stage – she is raucous, relentlessly positive, and a little ribald, and it really works." - Aussie Theatre

"The adults are probably having the most fun on stage. Jon English is headlining the show as legendary drag role Edna Turnblad, Tracy's mother, and in his scene work he reminds us all why he's so adored: he's so funny. He's a fussy, believable mother, and while he stumbled over his lines a couple of times, he worked as fast on his feet as ever, and won the audience right back (if he had indeed lost them in the first place, which is debatable)" - Aussie Theatre

"Neil Gooding has, once again, delivered a show with exactly the tone and feel required for its performance and audience alike to have a thoroughly enjoyable experience." - Aussie Theatre