Packemin Productions was formed in 2010 to produce Pro-Am musical theatre in association with the Riverside Theatres in Sydney.

The company burst onto the stage in February 2011 with a spectacular new production of JOSEPH AND THE AMAZING TECHNICOLOR DREAMCOAT at the Riverside Theatre. The show starred Andrew Conaghan (Guys & Dolls, Titanic, The Music Of Andrew Lloyd Webber) as Joseph, Australian Entertainment Legend Barry Crocker as Jacob, and one of Australia's premier Elvis interpreters Mick Gerace as Pharaoh.

This was followed in February 2012 by the hugely popular production of OLIVER! starring Wayne Scott Kermond (Singin' In The Rain, Guys & Dolls) as Fagin, Todd Keys (The Phantom Of The Opera, Dr Zhivago) as Bill Sikes and Katie McKee (My Fair Lady, Floyd Collins) as Nancy.

2013 marked a huge year for Packemin as we rolled out two major productions in the one year for the first time. February 2013 saw the Iconic THE WIZARD OF OZ brought to life on stage. The show starred Jimmy Rees (Jimmy Giggle on ABC's Giggle & Hoot) as The Scarecrow, Laura Murphy (Sparkles The Fairy on Channel 9's Magical Tales) as Dorothy, Helpmann Award winner Luke Joslin (Avenue Q, Annie, Dr Zhivago) as The Tinman, and multi-Mo Award winner Adam Scicluna as The Lion.

The inaugural PACKEMIN YOUTH PRODUCTIONS show was the family classic JOSEPH AND THE AMAZING TECHNICOLOR DREAMCOAT which played at The Concourse in Chatswood in January 2015. Our revival of the iconic musical starred Sam Moran (The Wiggles, Play Along with Sam) as Jacob.

Our sell-out production for February 2015 at Riverside Theatres was the world's most popular musical, THE PHANTOM OF THE OPERA, starring Ben Mingay (Wonderland, Jersey Boys) as The Phantom, Erin Clare (Snow White) as Christine and Johanna Allen (Wicked, Dr Zhivago) as Carlotta. In July / August 2015, Packemin brought to the stage Cameron Mackintosh's MARY POPPINS, starring Penny McNamee (Wicked, Salem's Lot, The Witches of Eastwick) as Mary Poppins, Shaun Rennie (Cats, Mamma Mia, Fiddler on the Roof) as Bert, Sam Moran (The Wiggles, Play Along with Sam) as George Banks and Kate Maree Hoolihan (We Will Rock You, Little Women, The Boy From Oz) as Winifred Banks.

In January 2017, Packemin Youth Productions presented CATS at The Concourse, with special Guest Star Simon Pryce (The Wiggles, The Phantom Of The Opera). This was following by our incredible production of MISS SAIGON at Riverside Theatre in July / August 2017, starring Marcus Rivera (Miss Saigon, The King And I) as The Engineer, Vivien Emsworth (The King And I) as Kim, Haydan Hawkins (Priscilla, Dogfight) as Chris, and Ashleigh O'Brien (Wicked, American Idiot) as Ellen.

Riverside Theatres will transport you to nineteenth century France as Packemin Productions—the team behind hit productions of Mamma Mia!, Jesus Christ Superstar, Shrek, Wicked, Legally Blonde and Phantom of the Opera—brings one of the world's most iconic musicals, the multi-award winning classic, Les Misérables to the stage in February 2020.

Based on Victor Hugo's novel, Les Misérables is a poignant, emotional story that follows ex-convict Jean Valjean's lifelong struggle for redemption after being imprisoned for stealing a loaf of bread. Once released he remains an outcast of society and in a stroke of desperation breaks his parole to gain his freedom. Police inspector Javert vows to hunt him down and bring Valjean to justice.

Set amidst the political upheaval of a developing France, accompanied by a heart-wrenching score, including some of the most well known musical theatre hits such as I Dreamed A Dream, On My Own, Stars, Bring Him Home and One Day More, Les Misérables is a must-see classic that will stay with you for years to come.

Packemin Productions, the team behind the hit productions of Jesus Christ Superstar, Wicked, Legally Blonde and The Phantom Of The Opera are transforming the Riverside Theatre stage into a Greek island paradise, to burst onto stage in a brand new production of the World's favourite feel-good musicals... MAMMA MIA! Playing at Riverside Theatres from the 2nd till the 17th of August, 2019.

Featuring hit after hit from the incredible songs of ABBA including Dancing Queen, Voulez Vous, S.O.S, Take a Chance On Me and The Winner Takes It All, MAMMA MIA tells the hilarious story of a young woman's search for her birth father. On the eve of her wedding, a daughter's quest to discover the identity of her father brings three men from her mother's past back to the island they last visited 20 years ago.

A mother. A daughter. Three possible dads. And a trip down the aisle you'll never forget! MAMMA MIA is the perfect musical for the whole family.


Packemin Productions are thrilled to present a new version of the world's first rock musical, JESUS CHRIST SUPERSTAR. It is a retelling of the final seven days of the life of Jesus Christ as observed through the eyes of the apostle Judas. Propelled by a stirring score, by turns driving and majestic, satirical and tender, JESUS CHRIST SUPERSTAR illuminates the transcendent power of the human spirit with a passion that goes straight to the heart.


Based on the novel and the hit-movie of the same name, LEGALLY BLONDE The Musical chronicles the journey of the famously perky Elle Woods, a fashion savvy, UCLA sorority girl who appears to have it all. But when her boyfriend Warner dumps her for someone 'serious', Elle uses her charm to getting into Harvard Law School in an attempt to win him back. With some help from new-found friends Paulette, Emmett and her chihuahua Bruiser, she learns that it's so much better to be smart.


Everyone's favorite ogre is back in the hilarious stage spectacle based on the Oscar-winning, smash hit film.

Based on the Oscar-winning DreamWorks Animation film, Shrek The Musical is a Tony Award-winning fairy tale adventure, featuring all new songs from Jeanine Tesori (Thoroughly Modern Millie; Caroline, or Change) and a sidesplitting book by David Lindsay-Abaire. Shrek brings all the beloved characters you know from the film to life on stage and proves there's more to the story than meets the ears.

"Once upon a time, there was a little ogre named Shrek...." And thus begins the tale of an unlikely hero who finds himself on a life-changing journey alongside a wisecracking Donkey and a feisty princess who resists her rescue. Throw in a short-tempered bad guy, a cookie with an attitude and over a dozen other fairy tale misfits, and you've got the kind of mess that calls for a real hero. Luckily, there's one on hand... and his name is Shrek.


A tragedy of passion and beauty Miss Saigon is one of the most stunning theatrical spectacles of all time. Nominated for an incredible number of Olivier, Tony and Drama Desk Awards, Miss Saigon is the second massively successful offering from the creators of Les Misérables, Claude-Michel Schönberg and Alain Boublil.


Following their hit productions of Joseph And The Amazing Tecnicolor Dreamcoat and Back To The 80's, Packemin Youth Productions returns to the Concourse in a massive new production of one of the worlds's favourite musicals....CATS!

With Special Guest Star SIMON PRYCE (The Wiggles, The Phantom Of The Opera) as Old Deuteronomy / Bustopher Jones

Composed by Andrew Lloyd Webber, and based on Old Possum's Book of Practical Cats by T. S. Eliot. The musical tells the story of a tribe of cats called the Jellicles and the night they make what is known as "The Jellicle Choice" and decide which cat will ascend to the Heavyside Layer and come back to a new life. It features the iconic musical theatre song "Memory".


PREPARE TO BE SPELLBOUND! 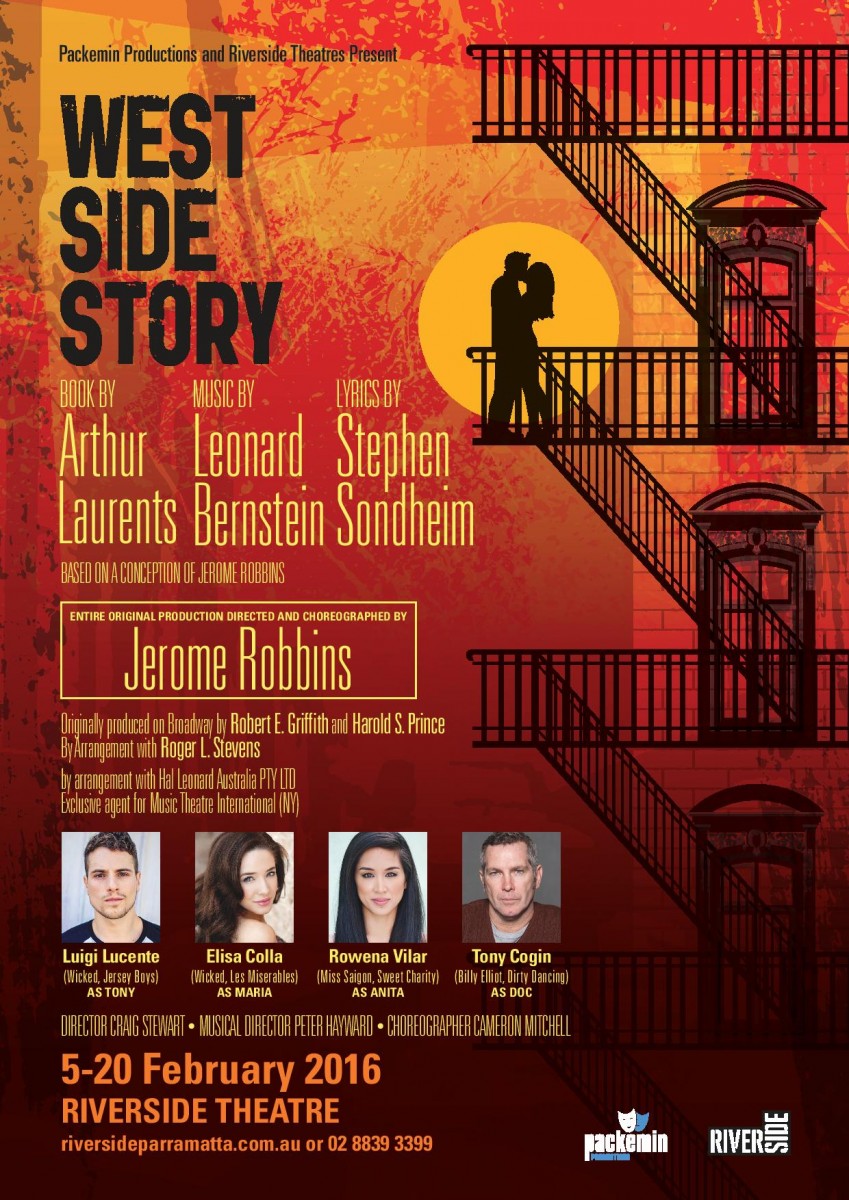 
Following the sell-out success of our latest sell-out show, Mary Poppins, Packemin Productions will bring you the world's greatest love story, WEST SIDE STORY. Be swept up in the story of Tony, Maria, The Sharks and The Jets in this Iconic multi-award winning Broadway musical that is one of the theatre's finest accomplishments. 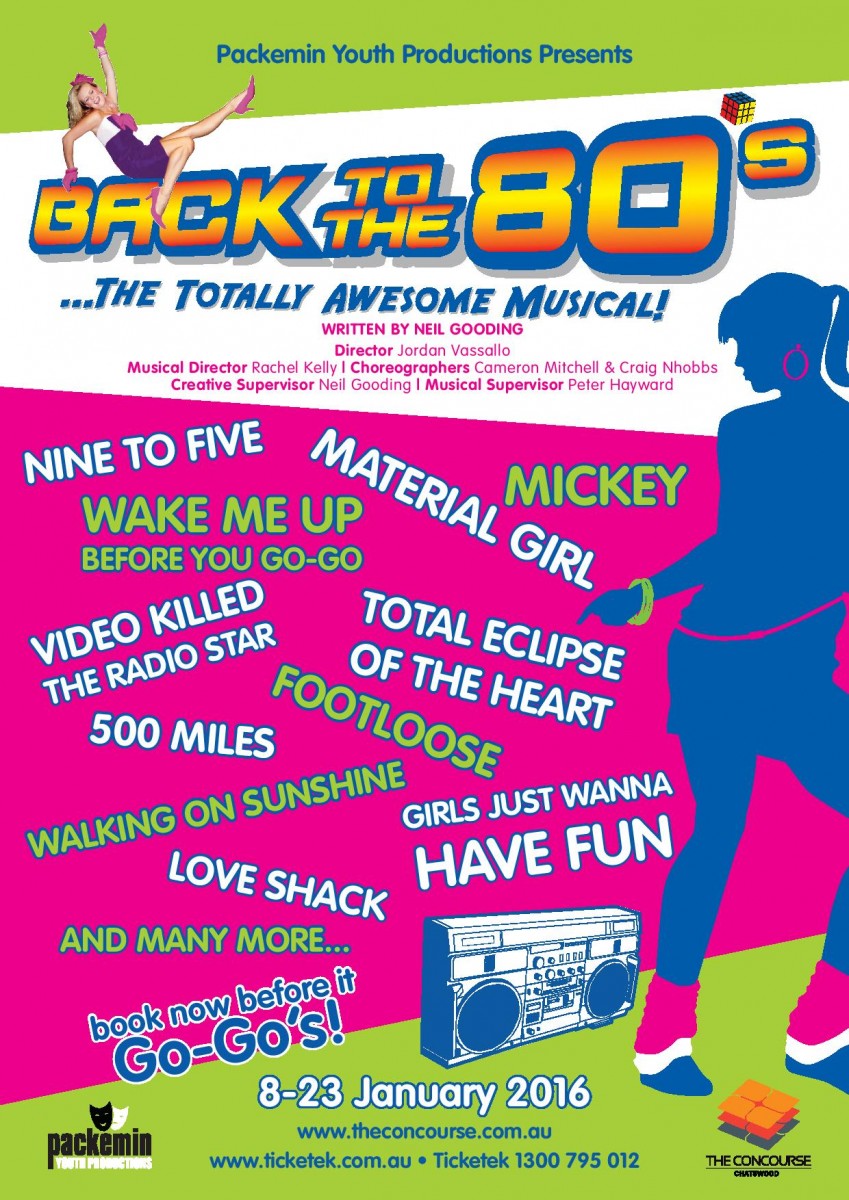 
Following the success of their inaugural sell-out production, Joseph and the Amazing Technicolor Dreamcoat, Packemin Youth Productions returns in 2016 with the totally awesome musical BACK TO THE 80's. Featuring over 60 of Sydney's most talented young performers and special guest star Mark Simpson (Hairspray, The Rocky Horror Show) as Mr Cocker. This awesome musical will include all your favourite hits from the 80's including Girls Just Wanna Have Fun, Man In the Mirror, 500 Miles, Kids In America, Footloose and more!


Brilliantly adapted from the beloved books by Australia's own P.L.Travers and the classic 1964 Walt Disney film, Packemin Productions invites you to let your imagination take flight as you step into the magical world of Disney and Cameron Mackintosh's Mary Poppins. With some of the most unforgettable songs of all time including Supercalifragilisticexpialidocious, Feed the Birds, A Spoonful of Sugar and Chim Chim Che-ree, Mary Poppins is a musical that will charm the whole family.

Joseph And The Amazing Technicolor Dreamcoat


The inaugural PACKEMIN YOUTH PRODUCTIONS show was the family classic JOSEPH AND THE AMAZING TECHNICOLOR DREAMCOAT, and played at The Concourse in Chatswood in January 2015.

The Phantom of the Opera


Our production for February 2015 at Riverside Theatres is the world's most popular musical,
THE PHANTOM OF THE OPERA.

Beauty And The Beast

The Wizard Of Oz


Following on from the massive success of Joseph and the Amazing Technicolor Dreamcoat, Packemin Productions and the Riverside Theatre staged a spectacular new production of OLIVER! in February 2012. OLIVER! starred Wayne Scott Kermond (Singin’ In The Rain, Guys & Dolls) as Fagin, Todd Keys (Phantom Of The Opera, Dr Zhivago) as Bill Sikes and Katie McKee (My Fair Lady, Floyd Collins) as Nancy 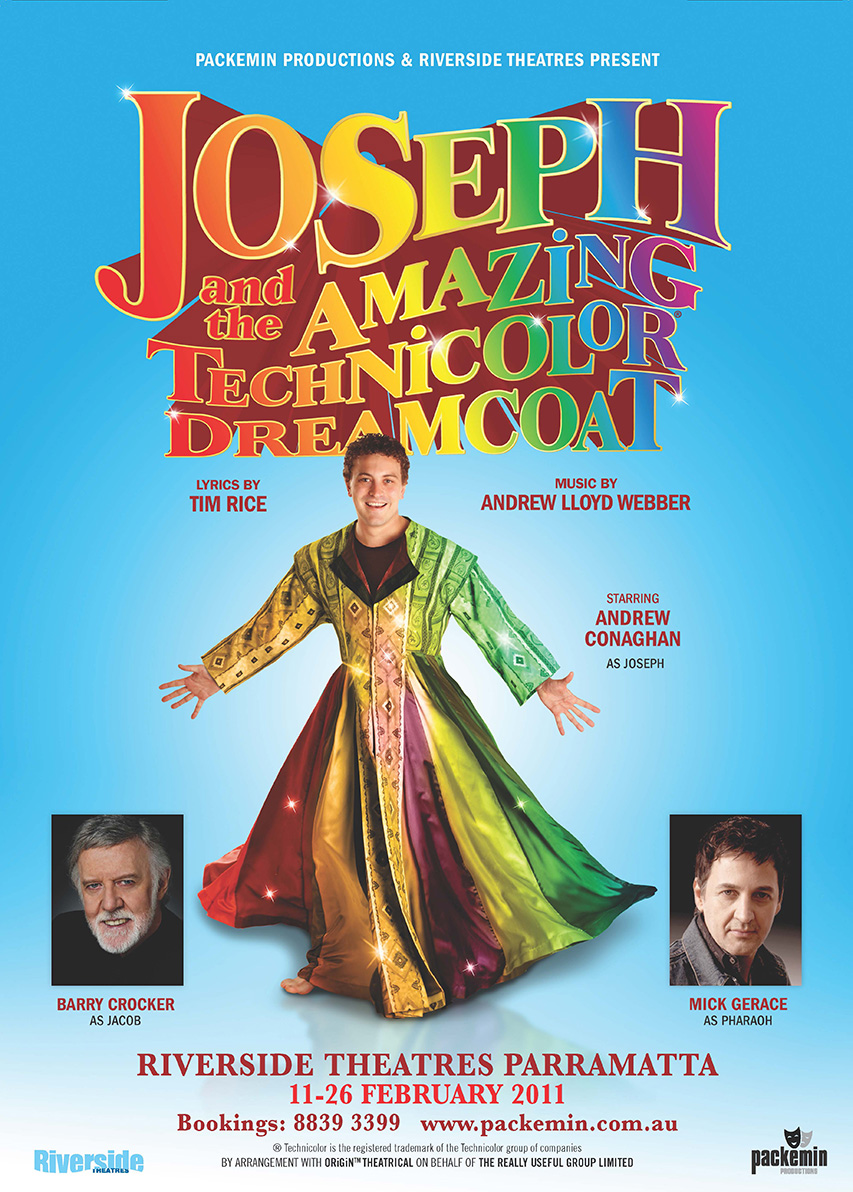 Joseph and the Amazing Technicolor Dreamcoat


With a crash of drums and a flash of light, Packemin Productions and the Riverside Theatres staged a spectacular new production of Joseph and the Amazing Technicolor Dreamcoat in February 2011. Starring Andrew Conaghan (Guys & Dolls, Titanic, The Music Of Andrew Lloyd Webber) as Joseph, Australian Entertainment Legend Barry Crocker as Jacob, one of Australia's premier Elvis interpreters Mick Gerace as Pharaoh and a massive cast of talented performers and local school choirs, the production was an incredible launch for Packemin Productions.